. . . the cancer has spread to Abby’s lungs. A few posts ago I mentioned a tiny “damn spot” that was picked up on her x-rays. Well, yesterday we had her 6-week follow-up x-ray, post the end of her rounds of carboplatin, and it confirmed that the spot is growing and is indeed a met.

Her oncologist, Dr. V., says this is not all bad news — he said we should celebrate the fact that there were no other mets, so we are trying to hang on to that.

But still . . . it’s not great to know that it is officially in her lungs. Also, the fact that it’s there brings up more treatment options. He sent us home with info on two different drugs we could try: palladia and/or cytoxan. We are trying to do some research and figure out what to do. (I’ve combed through a lot of the mentions of each on the forums here.)  The palladia sounds potentially promising, but also quite scary with the bad side effects. She’s in such great health otherwise, and has such great energy, that I don’t want to give her something that will mess that up. Not sure what we are going to do. Might try the palladia and see how it goes. Since she had so few side effects with the carboplatin, maybe she would be fine on the palladia as well. And if not, there is the cytoxan to fall back on.
Still trying to decide. The other potentially scary thing is that some folks commented online that when their dogs had bad reactions to the palladia and had to go off it, the tumors came back like gang busters. Don’t want to piss the tumor off and have it come back all Incredible-Hulkish on us . . . 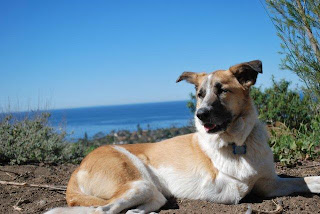 In happier news, we are definitely going to enjoy every day with her. Today is a beautiful day here in SD (as evidenced in the photo above that I just took of her) so I took Abby down to Fiesta Island – her favorite place in the world. I didn’t bring the camera along because going by myself and carrying her water and her leash and keeping an eye on her seemed like a bit much to also be trying to snap shots of her. But then, of course, I wished I had the camera because (a) there was another tripawd there (not that she cared, because he was swimming and she was not interested) and (b) there was this 8-mo-old pup that she’s played with before and they had a great time racing around.

Abby is so energetic and rambunctious it’s hard to believe she is “sick.” Dr. V. said that her body really has no idea that little spot of cancer is in there. She’s certainly in the envious position of being blissfully ignorant. Of course, even if she did know, I’m pretty sure she’d still be racing around enjoying every minute to the fullest – that’s just how dogs are. Definitely need to take a cue from them!

Abby is a 2 yr old mixed rescue pup who has had bone cancer since she was 15 months old. You can also visit her more detailed blog at http://poochsmooches.blogspot.com
Pooch Smooches is brought to you by Tripawds.
HOME » NEWS » BLOGS » FORUMS » CHAT » YOUR PRIVACY » RANDOM BLOG